“At a Presbytery meeting held on the 31st August Mr. Gary Gunn and Mr. Craig Scott, both members of Glasgow RPCS, were taken under care of Presbytery and given a provisional license to preach.”

Also, Rev. Donnie Mackinnon was ordained and installed as the church planting pastor of Stirling. From the RPCS website:

“On Friday the 30th August, Mr. Donnie Mackinnon, a licentiate of the Scottish Presbytery, was ordained and inducted as organising minister of the new Stirling church plant.”

“Rev. Kenneth Stewart, the moderator of Presbytery, gave the charge to Mr. Mackinnon and the congregation.  Preaching from 2 Timothy 4, he powerfully set out the work of the minister in preaching the Word, reproving, rebuking, and exhorting with patience and teaching.  Rev. Andrew Quigley, the Presbytery Clerk, then put the ordination vows to Mr. Mackinnon.  Mr. Mackinnon was then ordained and inducted through prayer made by Rev. Donald Macdonald and by the laying on of hands.”

Please pray for this new church plant and these new students. 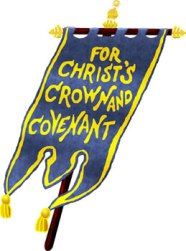