The Dallas Reformed Presbyterian Fellowship (RPCNA) has a new meeting location. They are meeting in the Lewisville Seventh Day Adventist School at 1471 West Corporate Drive.

The morning class time begins at 9:30 am and worship begins at 10:45 am. The group is currently in the planning stages of a 2:00 pm afternoon service or a 5:30 pm service. Please visit their website www.dallasrpf.org for the most up do date schedule.

The Pacific Coast Presbytery of the RPCNA has a new website 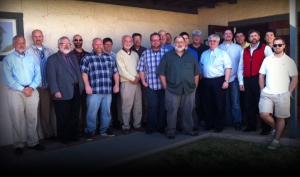 Men of the Pacific Coast Presbytery of the RPCNA

Two new students at the Scottish RP Theological Seminary and the ordination of Rev. Donnie Mackinnon of Stirling

“At a Presbytery meeting held on the 31st August Mr. Gary Gunn and Mr. Craig Scott, both members of Glasgow RPCS, were taken under care of Presbytery and given a provisional license to preach.”

Also, Rev. Donnie Mackinnon was ordained and installed as the church planting pastor of Stirling. From the RPCS website:

“On Friday the 30th August, Mr. Donnie Mackinnon, a licentiate of the Scottish Presbytery, was ordained and inducted as organising minister of the new Stirling church plant.” 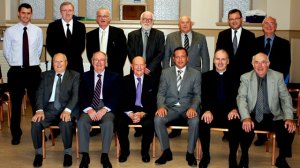 “Rev. Kenneth Stewart, the moderator of Presbytery, gave the charge to Mr. Mackinnon and the congregation.  Preaching from 2 Timothy 4, he powerfully set out the work of the minister in preaching the Word, reproving, rebuking, and exhorting with patience and teaching.  Rev. Andrew Quigley, the Presbytery Clerk, then put the ordination vows to Mr. Mackinnon.  Mr. Mackinnon was then ordained and inducted through prayer made by Rev. Donald Macdonald and by the laying on of hands.”

Please pray for this new church plant and these new students.

“Singing calls up the soul into such a posture, and doth, as it were, awaken it: it is a lively rousing up of the heart. Singing God’s praise is a work of the most meditation of any we perform in public.”

“sing unto the Lord, ye saints of his.” As God requires outward and inward worship, so a spiritual frame for inward worship may be forwarded by the outward composure. Gazing drowsiness hinders the activity of the soul, but the contrary temper furthers and helps it. Singing calls up the soul into such a posture, and doth, as it were, awaken it: it is a lively rousing up of the heart.  Singing God’s praise is a work of the most meditation of any we perform in public. It keeps the heart longest upon the thing spoken. Prayer and hearing pass quick from one sentence to another; this sticks long upon it. Meditation must follow after hearing the word, and praying with the minister for new sentences, still succeeding, give not liberty, in the instant, well to muse and consider upon what is spoken: but in this you pray and meditate. God hath so ordered this duty, that, while we are employed in it, we feed and chew the cud together. “Higgaion,” or ” Meditation,” is set upon some passages of the Psalms, as Psalm ix. 16. The same may be writ up the whole duty, and all parts of it; namely, “Meditation.” Set before you one in the posture to sing to the best advantage: eyes lifted to heaven, denote his desire that his heart may be there too; he hath before him a line or verse of prayer, mourning, praise, mention of God s works; how fairly now may his heart spread itself in meditation on the thing, while he is singing it over! Our singing is measured in deliberate time not more for music than meditation. He that seeks not, finds not, this advantage in singing Psalms hath not yet learned what it means.